Back on the night of the 4th of October, I joined thousands of Torontonians in wandering the streets late at night, looking at some of the works of art put out for public display in the all-night art festival of Nuit Blanche. One of the works I found most evocative was an installation mounted by Montréal-based artist Maria Ezcurra, draped on an alleyway on Spadina Alley in Toronto's oldest oldest Chinatown. The installation's title? Made in China. 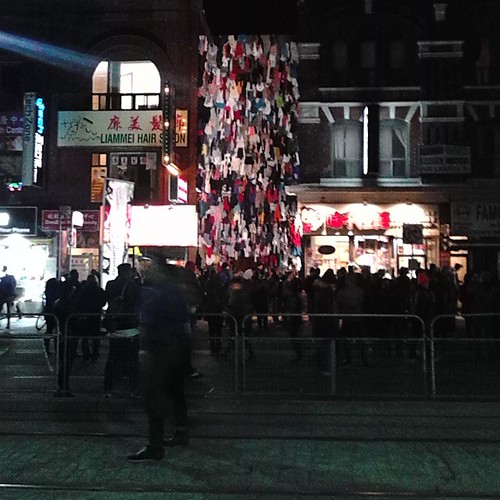 The installation is composed of clothes labeled “Made in China,” donated by the community and set in a Chinatown alleyway. This collaborative piece functions as a façade filling an empty space between two buildings, creating in this way both a physical and a symbolic connection among cultures.

The work is about connections between Eastern and Western societies, between old customs and current trends, between globalization and tradition. It is about how we see and understand ourselves from other views, and vice versa. But mostly, it is about trying to build a bridge in which we are all represented, as a society as much as individuals.

Made in China is an anthropology of our shared present. Clothing in this project is perceived as an effective artistic medium for knowing and learning in new ways about ourselves in relation to others, thus symbolically connecting individual knowledge with culturally produced ideas. 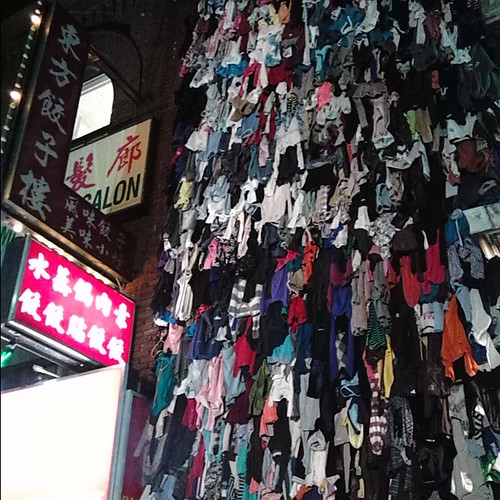 Two months later the news came out that , China now had the world's largest economy, at least measured by purchasing power power and in aggregate. China, as Joseph Stiglitz noted in Vanity Fair, is sufficiently large and sufficiently rich to be #1 again, and a major force in the world.

China is also facing the prspect of rapid population aging. Feng Wang 2012 analysis for the China Economic Quarterly, "Racing Towards the Precipice". Between a shift to low levels of fertility and rapid increases in life expectancy, China's working-age population can be expected to start contracting just as its population of potential retirees is growing. Multiple sources predict the working-age population will peak in just a couple of years. This sort of rapid aging could impose very serious costs on China. Ultimately, it could lead to China not completing its economic convergence towards the high-income societies of the world.

Will this necessarily mean that societies with more advantageous age structured, especially neighbouring ones, will profit? That potential certainly does exist, for instance in Southeast Asia. This International Business Times article sets the tone of that argument.


Home to 600 million people and located next to the growth engines of China and India, countries comprising the Association of Southeast Asian Nations (ASEAN) economies face the challenge of creating enough jobs to absorb their domestic growing labor forces and building infrastructure to boost productivity, according to an HSBC economist.

“We believe the future, at least from a demographic and natural resource perspective, belongs to ASEAN,” HSBC economist Trinh Nguyen said in a research note. “But whether this will be realized will be dependent on the will of the countries’ leaders.”

Although seen as the new frontier for growth, these Southeast Asian countries still performed below their potential, averaging just 5 percent growth in the past decade. The region attracted $111.4 billion in foreign investment last year -- almost equal to China’s $121.1 billion. But Nguyen thinks ASEAN countries can and should do better.

In the coming decades, ASEAN nations will have more prime-age adults (age 25-54) than ever before, and their dependency ratio (the proportion of the young and aged to working age adults) will drop significantly, freeing up resources for other investment opportunities, according to HSBC. Economic behavior varies at different stages of life -- while the young require investment in education and health, and the aged require health care and pensions, prime-age working adults supply labor and savings.


For all the handwringing over rising labor costs on the mainland, China's annual output per manufacturing worker remains a staggering 15 times greater than Vietnam's ($57,100 versus $3,800), four times Indonesia's and more than three times that of Filipinos. Bottom line: Higher wages may not drive as many foreign manufacturers out of China and into Southeast Asia as some have predicted. Why relocate southward only to get less for your money?

Given all the hype about regional integration next year, those numbers should be sobering. On Jan. 1, the Association of Southeast Asian Nations will take its most dramatic step yet toward creating a Europe-like common market for 600 million people. McKinsey reckons that a better-integrated Asean could generate as much as $615 billion in fresh economic value annually by 2030. But it will take many years and considerable political will to unify 10 disparate economies that often compete more than they cooperate, and the progress won't necessarily be linear.

Infrastructure is, of course, vitally important to making Southeast Asia more efficient. As Tonby points out, Asean would be well served by "overcoming some of the fragmentation that has prevented companies, technologies, and services from achieving scale in the past."

But human development -- including aggressive investment in education, training and healthcare -- could be even more critical. Take Indonesia. Southeast Asia's biggest economy often touts its demographic dividend -- 26 percent of its 250 million people are under 15 -- but that's a strength only if Jakarta gives them the tools to compete. "We often brag about how much cheaper we are in terms of labor vis-a-vis that of China and vis-a-vis other parts of the world, but we tend to overlook the fact that we're not as marginally productive as China," says Gita Wirjawan, Indonesia's former trade minister. "We've got to do something about building the soft infrastructure for the purpose of creating a much more marginally productive society."

The same is true in Thailand -- where an inefficient and underfunded education system continues to hold down productivity -- as well as Myanmar, Vietnam, the Philippines and elsewhere. Even as they map out new highways and railroad tracks, Asean governments need to increase investment in education exponentially. As of 2012, for example, Indonesia was spending 3.6 percent of gross domestic product on education, while Malaysia spends 5.9 percent and Thailand 7.6 percent. Those ratios need to be closer to 20 percent in the years ahead.


Consider land. A new land-acquisition law, passed in the dying months of the previous government in 2013, makes buying farmland on which to build factories tremendously complicated and expensive; by law, companies have to pay four times the market price in rural areas. There's simply no free market for land in India.

On labor, India should have a cost advantage over China, whose labor-intensive goods now flood the Indian market. Chinese wages have risen rapidly over three decades of double-digit growth. India’s haven’t, and almost half the population is still engaged in unproductive agriculture. Yet tough labor laws mean that the opportunity costs of hiring workers remain cripplingly high. While the government has started a debate on reforming those laws, few changes are evident yet.

Unreliable and expensive power supplies hamper all of India's businesses. Indian governments have long subsidized agriculture and regular consumers by charging higher rates to industry. China and other emerging nations have followed the opposite strategy. India need not reverse course completely, but it needs at least to even out prices for everyone while boosting overall supply.

The issue of expensive capital is one that should particularly exercise Rajan. He knows that India’s closed financial system artificially raises the cost of capital. He's stuck with a tight monetary policy for the moment because of high inflation. But compared to the rest of the world, Indian interest rates tend to be too high even when monetary policy is more accommodative. There's also plenty more room for India to open up its financial system, even if it remains wary of the kind of cowboy capitalism that led to the 2008 crash.


As numerous sources note--for instance, the OECD report "Economic Outlook for Southeast Asia, China and India 2014: Beyond the Middle-Income Trap" (PDF format)--moving beyond the middle-income stage countries need to innovate to move ahead. Simply having large numbers of workers will not guarantee economic growth if other elements of economic policy aren't sufficiently adept. China, notwithstanding its documented problems and likely prospects, has so far been making a better job of its particular age structure than its neighbours have. Will they catch up? (Will China slow down even further?) All that remains to be seen.

This sort of thing shouldn't need to be emphasized. Look, for instance, at central Europe, where despite advantageous geography and high levels of human development bad policy kept central Europe from catching up with northwestern Europe in the fashion of southern Europe, and where now population aging may mean central Europe might never completely catch up. Demographics, alone, is not destiny. There are things that can be done to make the most of it; there are things that can be done to do otherwise. Simple statistics, by themselves and without interpretation, do not necessarily mean that much.

Posted by Randy McDonald at 3:10 AM

About Eastern Europe, it is precisely our huge reforms made after the fall of communism that brought us prosperity, in spite of catastrophic demographics. Catching up with NW Europe is not the goal to make in a 15-20 years frame time. That takes much longer. Half a century perhaps. China, on the other hand with so-so demographics and so-so reforms is not even close to E Europe in terms of GDP or quality of life.

Final point is that E Europe may catch NWE with further reforms and bad demographics. ASEAN, on the other hand, may have Nigerian demographics but without Western economics and values( or something better) will never achieve prosperity.

What I think is that demography isn't so much destiny if you have a very strong growth momentum that China has now. Thailand and some Eastern European countries don't have that momentum and they'll need much longer to catch up with developed countries. The thing is that they'll still be in the catch up process when ageing starts to show it's nasty sides, whereas China may have already completed catch up by then.