The blog Information is Beautiful has just now shared the results of the 2018 iteration of the Information is Beautiful Awards, a celebration of "the world's world’s best data-visualisations and infographics." Many of these data-visualizations and infographics deal with demographics, in one way or another. The winner, the video "Simulated Dendrochronology of U.S. Immigration 1790-2016" assembled by Pedro M. Cruz and team together with Northeastern University and National Geographic, does a remarkable job of showing trends in American immigration over nearly two centuries.

The project's website explains what the video shows and how it shows it.

Nature has its own ways of [organizing] information: organisms grow and register information from the environment. This is particularly notable in trees, which, through their rings, tell the story of their growth. Drawing on this phenomenon as a visual metaphor, the United States can be envisioned as a tree, with shapes and growing patterns influenced by immigration. The nation, the tree, is hundreds of years old, and its cells are made out of immigrants. As time passes, the cells are deposited in decennial rings that capture waves of immigration.

A cell represents a specific number of immigrants who arrived in a given decade. A computational algorithm deposits those cells in such a way that simulates the appearance of tree rings. This physics-based system generates a data visualization that is based on millions of data points. The data was queried from IPUMS-USA and consists of millions of samples of questionnaires from U.S. Censuses.

The historical formation process of this tree can be observed in an animated way. Here, the granularity of the dataset is unveiled as hundreds of points of origin are laid out.

The U.S. and its population growth can also be envisioned as a forest of trees. Tree sections, one for each state in the U.S., show the growth profile due to incoming immigration, but also due to newborns (here referred to as natural-borns).

Each state has grown at different rates, with varying immigration profiles. Some are larger, some are smaller, and some have complex shapes that portray their immigration profile. Tree rings that are nearly circular indicate that population growth due to immigration was much less significant than that due to natural-born persons.

Posted by Randy McDonald at 4:32 AM 7 comments:


Early on the evening of the 1st of December in Toronto, on World AIDS Day, I stopped by the AIDS Memorial. Fresh red and white carnations were woven among the panels as citylight gleamed in the background. 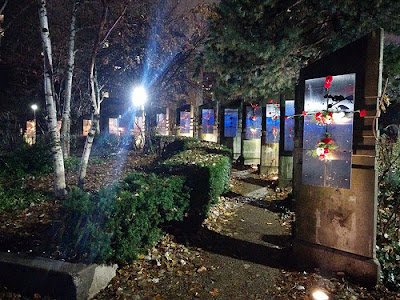 Many of the assembly of links I posted this evening over at my personal blog relating to World AIDS Day dealt with how it was being remembered. Others dealt with successful approaches to the epidemic, to the growing recognition that people being successfully treated cannot transmit HIV to other partners and to public-health approaches like that of Demetre Daskalakis in New York City which destigmatize HIV and make it manageable in a social sense as well as in a medical sense. Still others deal with how, in Russia, prevailing social conservatism is contributing to an accelerated spread of HIV; the Russian Demographics Blog noted the alarming shape of the HIV epidemic in Europe, with increasing success in the European Union being more than counterbalanced by an expansion of the epidemic in Russia.

As for HIV and AIDS, my thinking on this pandemic is dominated by two approaches.

1. As was made clear to me by Jacques Pepin's The Origins of AIDS, which not just traced the modern pandemic to a zoonosis in the interior of central Africa but outlined how a chance configuration of historical events led not only to the HIV pandemic but to the particular shape of the pandemic, the extent to which global catastrophes can be created by chance occurrences is appalling. What catastrophes, epidemiological or otherwise, have been unleashed on an unknowing world now? There may be good sense to the precautionary principle.

2. I remain impressed by the fact, realized by me in a 2016 visit to the AIDS Memorial, that biomedical intervention of a sort that would have been science-fictional in the 1980s can successfully control even HIV. What explanations--what explanations, more, that are not excuses--can there be for this pandemic's survival? If, as an early observer of HIV and AIDS noted, the epidemic immediately showed up the weak points in public health at every level, it still does this now.

Posted by Randy McDonald at 4:58 AM 7 comments: