Houellebecq is as wrong today as he was yesterday


When I wrote last night about Houellebecq and Submission, just like the rest of the world I had no idea what would happen today in Paris, with the massacre in the offices of Charlie Hebdo. I was as surprised anyone to find out the subject of the cover of the most recent issue of that satirical magazine, courtesy of the Los Angeles Times. 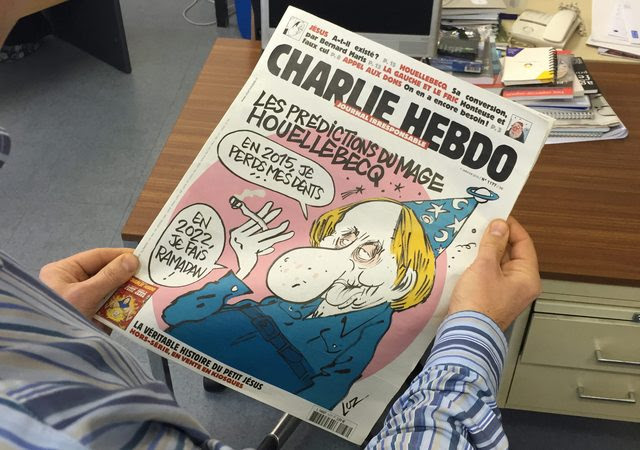 Houellebecq's novel is just as fundamentally incorrect about the world and French realities today as it was yesterday. As noted by Leonid Bershidskiy at Bloomberg View, Submission labours under a mass of prejudices and improbabilities. It just doesn't work in describing any kind of plausible scenario.

Meanwhile, I would also like to point people to Juan Cole's essay "Sharpening Contradictions: Why al-Qaeda attacked Satirists in Paris". Cole's observation that the people responsible likely want to start broader conflict where there need be none is quite probable.

The problem for a terrorist group like al-Qaeda is that its recruitment pool is Muslims, but most Muslims are not interested in terrorism. Most Muslims are not even interested in politics, much less political Islam. France is a country of 66 million, of which about 5 million is of Muslim heritage. But in polling, only a third, less than 2 million, say that they are interested in religion. French Muslims may be the most secular Muslim-heritage population in the world (ex-Soviet ethnic Muslims often also have low rates of belief and observance). Many Muslim immigrants in the post-war period to France came as laborers and were not literate people, and their grandchildren are rather distant from Middle Eastern fundamentalism, pursuing urban cosmopolitan culture such as rap and rai. In Paris, where Muslims tend to be better educated and more religious, the vast majority reject violence and say they are loyal to France.

Al-Qaeda wants to mentally colonize French Muslims, but faces a wall of disinterest. But if it can get non-Muslim French to be beastly to ethnic Muslims on the grounds that they are Muslims, it can start creating a common political identity around grievance against discrimination.

This tactic is similar to the one used by Stalinists in the early 20th century. Decades ago I read an account by the philosopher Karl Popper of how he flirted with Marxism for about 6 months in 1919 when he was auditing classes at the University of Vienna. He left the group in disgust when he discovered that they were attempting to use false flag operations to provoke militant confrontations. In one of them police killed 8 socialist youth at Hörlgasse on 15 June 1919. For the unscrupulous among Bolsheviks–who would later be Stalinists– the fact that most students and workers don’t want to overthrow the business class is inconvenient, and so it seemed desirable to some of them to “sharpen the contradictions” between labor and capital.

The operatives who carried out this attack exhibit signs of professional training. They spoke unaccented French, and so certainly know that they are playing into the hands of Marine LePen and the Islamophobic French Right wing. They may have been French, but they appear to have been battle hardened. This horrific murder was not a pious protest against the defamation of a religious icon. It was an attempt to provoke European society into pogroms against French Muslims, at which point al-Qaeda recruitment would suddenly exhibit some successes instead of faltering in the face of lively Beur youth culture (French Arabs playfully call themselves by this anagram). Ironically, there are reports that one of the two policemen they killed was a Muslim.

We can have a clash of civilizations if we want to. Let us not want this.
Posted by Randy McDonald at 4:59 AM