Joe Sacco, "Not in my country"

A tweet from Torontonian (and Maltese-Canadian) Shawn Micallef pointed me to the news that two Libyan fighter jet pilots defected (with their pilots) Monday, and one Libyan warship following yesterday. This latest episode in Libyan-Maltese relations ads a new twist in relations between the two countries, in the 1970s and 1980s quite close owing to Maltese left-wing politician Dom Mintoff's desire to move beyond dependence on Britain and Libyan interest in establishing a close relationship with some country.

This is the latest episode in unexpected--unregulated--migration from Libya to Malta. I'd like to point our readers to Maltese-American graphic novelist Joe Sacco's 2010 graphic novel "Not in my country", available online at the website of the Guardian and providing an affecting and information look on the phenomenon of unregulated/irregular/illegal migration to Malta. 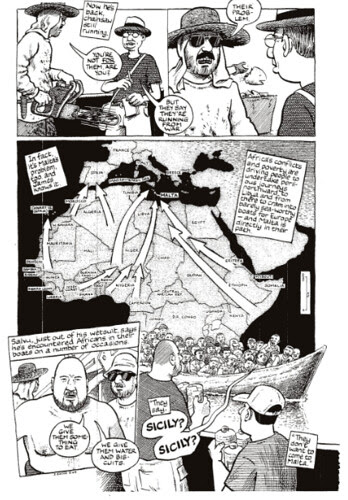 While trans-Mediterranean migration is a major issue for southern Europe, it's a particular issue for a small insular Malta that already has one of the higher population densities in Europe and few ways for these migrants to make it to the European mainland--an Italy that would be the logical (and, likely, preferable) next step is unreachable. Sacco goes into detail in his work.