I was in the area and it seemed apropos after the Orlando shooting, so I went off to visit Toronto's AIDS Memorial, in Church and Wellesley's Barbara Hall Park, before I went to work Monday afternoon. It is simple enough, pillars almost two metres high each with six inscribed metal plates of the names of the dead, organized chronologically by the year of their death, in a peaceful garden. It is a solemn place, but lovely for all that.

I've visited the memorial before. I even shared a picture of it last year, looking at the memorial pillars from the outside as framed by the roses. I had not taken a picture of the memorial from the inside, the pillars with the plaques of inscribed names--so many names--arcing away into the distance. 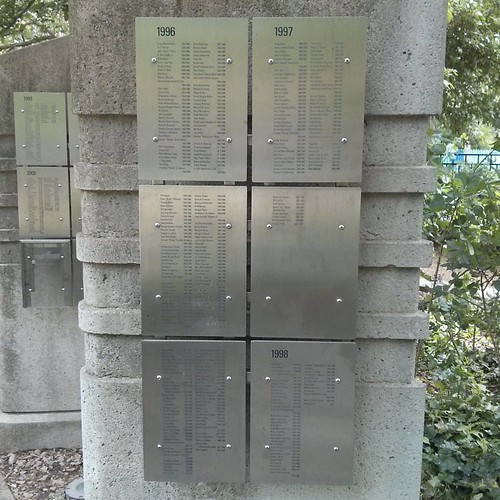 There is actually quite a lot of information you could surmise about the epidemic from the information on the plates. In the first years of the 1980s the plates are almost empty, one being more than enough for a year's dead. Later, they spill over into multiple plates. Still later, around 1990, the plates shift to a smaller type, as the surging numbers of people infected when HIV began its explosive spread in the early 1980s progressed to AIDS.

In the mid-1990s, the impact of effective antiretroviral therapy, much more effective than the easily blunted AZT monotherapy, becomes evident. It is on the 1996-1998 pillar this is most visible. The year 1995 took up most of the previous pillar, but 1996 took up a mere half, 1997 two plates, and 1998 only one. Later plates and later years revert to the low density of names of the mid-1980s, this time with the smaller font. (The 1999 and 2000 plates on the next pillar are visible to the left. Later years' plates have fewer names still, reverting to the early 1980s' larger font, as HIV infection becomes manageable.)

Anti-retrovirals worked. They continue to work, and in ways that might not have been imagined by the originators of modern anti-retroviral therapy, treating and even preventing HIV infection. Toronto's AIDS Memorial, and like memorials in other cities around the world, serve as effective partial records both of a terrible medical/human tragedy and how, if too late, this tragedy began to be ended. It's still too far away from ending in some parts of the world, but there is hope. What better testimony is there to this than the pillars of the AIDS Memorial which remain unscarred by plaques?