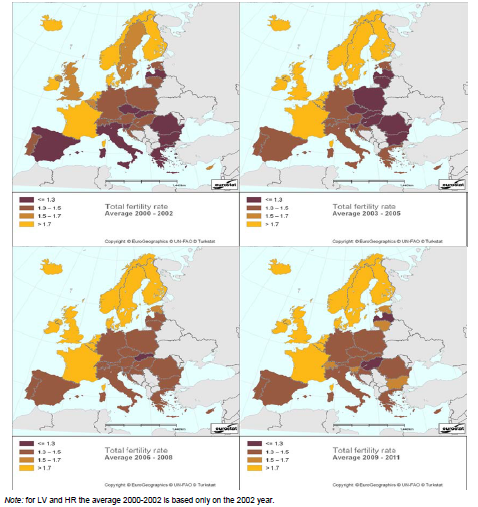 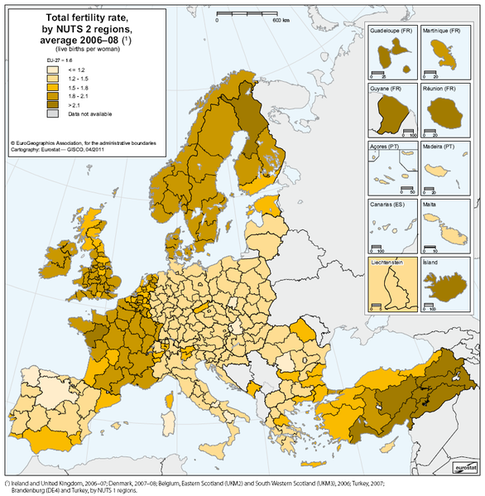 Similar historical baggage could apply to somewhere like Romania, given the pro-natalist policies of the Ceausescu regime.

The theory of a fertility dip during the transition from 'traditional' to 'modern' gender roles makes a lot of sense in explaining the current crop of lowest-fertility countries (the trough coming when childless/unmarried women have a similar socio-economic status to men in the same situation, but mothers and wives are still constrained by the 'nuclear family' model). I wonder, where does somewhere like the USA fit into this picture? Culturally, it would seem to be comparable to the German situation (with even worse provision for working mothers), and yet the USA's fertility rate is still much higher than Germany's.

Interesting hypothesis. One possible flaw would be that the maps/statistics seem to indicate that the total fertility rate is similar in E and W Germany, despite the differences in family policy/structure. As the data indicates that E Germany has much lower rates of childlessness, presumably this means that in W Germany high rates of childlessness are offset by larger families by those who do have children while in E Germany this is not the case.

Colin, agreed that Romania is quite likely.

There might be worse provision, but I wonder if there's more acceptance for working mothers in America than in Germany.

David, I agree. I think that a situation where most people still have children but simply have fewer than they'd like is more tractable than a situation where a sizable number of people have dropped out of parenting altogether.

Colin:
The US, has a fair amount of immigration, and immigrants have more kids than native-borns.

The US is also more religious and has more rural & exurban areas. Both the Catholic church and Church of latter-day Saints (Mormons) are pro-natal. Meanwhile, having kids is easier in the countryside.