How many babies are Europeans actually having?

Obviously, I'm not the first one to discover this. Serious demographers have been aware of this for a very long time and there have been attempts to create what is called an Adjusted Total Fertility Rate, which as the name implies, tries to take into account changes in the timing of birth and derive a more accurate estimate of how many children people are actually having. Luckily, the good folks at the Vienna Institute of Demography publishes regularly a European Demographic Data Sheet which summarizes demographic data for European countries, including an adjusted total fertility rate, and is available here. The most recent edition, from 2008, includes this neat little map that shows very clearly part of what I was trying to say in that earlier post: European demography is not universally bad, there is a number of countries with relatively healthy fertility rates. (click to enlarge) 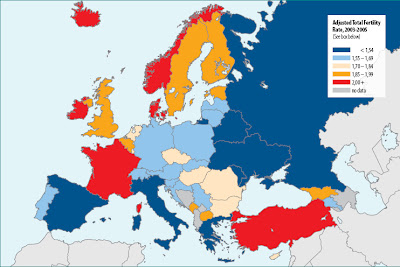 Having said that, the demographic situation in many countries is of course very serious. Excluding Turkey, only about a third of the European population live in countries with fertility rates approaching replacement (red and orange). For the EU as a whole the adjusted TFR is 1.72, better than the 1.53 the TFR would indicate, but in many countries, particulary Southern European ones, the situation is pretty dire.

At this point one should note that fertility isn't the only important indicator here. For instance, while adjusted fertility is higher in Germany than in Spain, Germany has had lower fertility for longer, leading to a higher median age and probably a worse situation overall, at least as of right now. Ditto for Estonia, which has both a high median age and suffers from emigration. Still, I think the adjusted TFR as shown in the map above does help you to get a more accurate demographic picture, as long as you keep in mind that there are other variables.
Posted by Aslak at 6:46 AM

For those interested, here is the paper by Bongaarts and Feeney which originally proposed the Adjusted TFR;

The Atfr measure has been subject to quite an extensive critique from several authors but the underlying intuition is important. The key is the extent to which one assumes that that the tempo effect is a temporary drift or whether (and how strong) it has a lagged effect on quantum.

Claus, thanks for the link, I hadn't read the paper before.

ATFR does have weaknesses, but I do think it is a much more accurate measure of the overall level of fertility than simply TFR. Certainly, if you look at cohort fertility rates in Europe it seems like they're much more likely to end up aligning with ATFR than with TFR.

It seems that several Balkan countries will not actually be much worse than the European average if the TFRs rise to the ATFR level. In fact many might be better off than Italy and the Iberian countries.

It seems that the U.K., France, Denmark, Norway, and some others are close to reaching the ATFR measure, as predicted, though we will still have to wait and see what happens.

Anonymous:
Yes, f you look at the most recent data, there clearly has been an uptick in TFR as expected.

I think if you look at the Balkans you're right that in some cases the fertility rate is really not that bad, but there is a serious problem with essentially mass emigration in much of Eastern Europe in addition to the fact that these countries are generally poorer and thus less able to cope with aging. Look at Bulgaria for instance, where the population has been plummeting from 9 to 7.7 million over the last couple of decades.

Also, the economic crisis comes at a very bad time, as about now is when much of the catching up is supposed to happen. You very clearly saw that happening until last year, but the crisis might delay that in certain countries perhaps indefinitely.

Outside Eastern Europe the countries I'm most worried about are Greece and Italy. These are countries that already have high median ages, they are heavily indebted with public debts over 100% of GDP, they're fairly hostile towards immigrants and they have some of the worst levels of governance in Europe, particularly Italy. Those are all good reasons to be pessimistic.

True, the large scale emigration from Eastern Europe and the Balkans will make the demographic problems worse than they would otherwise be. The countries of the Caucasus region will probably have similar troubles and without the benefits of E.U. membership any time soon. Also, it seems like many of the low fertility countries in Asia will also probably face similar problems in the relatively near future.

I wonder what the ATFR would show for some of the low fertilty countries in East Asia? The article showed the ATFR for Japan being 1.42. It would be interesting to get an idea of what numbers would appear for South Korea and some others.

Also, it would be interesting to see how the ATFR of the Hispanic population of the United States (which is much higher than the average and would seem more likely to decline than to rise) compares to the ATFR of the other segments of the total population.

Anon 1 (You guys should use nick names, it makes it easier to tell you apart): If you look in the paper Claus linked to in the first comment, the calculation is explained in the appendix.

Anon 2: From what I remember, the average at birth for hispanics is pretty stable and low, my guess is it wouldn't deviate much from the TFR of around 2.9 (if I remember correctly)

You're right, it would be interesting to see it by group in the US. The high TFR for Hispanics in the US is pretty unusual given that TFR in Latin-America really aren't that high, at least in Mexico.

As for Korea, I tried to dig up some statistics, but I couldn't get the gov't statistics web page to work. My hunch is that like Japan it's below even the lowest European countries. The low fertility in East Asia is really something quite extraordinary. In Europe the situation in Italy comes close, but even there it's better than in Japan now and what Korea will be like soon. A couple of decades after that China might be in the same boat. The Asian century, if it ever happens at all, might be very brief indeed.

The Fall of the House of Usher said...

Looked up how ATFR is calculated and i see a problem. It assumes a gradual change which i don't think is always reality. Especially in the former communist countries i would expect a shock.

ps. What happened in the Czech Republic in 93 (94 has a sudden increase in first births but babies take 9 months to make)

ps2. I find the data extremely smooth for the Czech Republic. Is this reality or an artefact of how the data is created?

Swod: The Korean TFR is as far as I knowd the lowest of any major country (not counting Hong Kong). I was actually looking for data on the change in maternal age at birth. I couldn't find exactly what I was looking at, but the OECD family data base had date on maternal age at first birth, which should be similar given the extremely low TFR. It did rise a lot, at least until recently which suggests that completed fertiliy will end up higher. Without the data it's hard to find out, but I'd guess the ATFR in Korea is similar to Japan, around 1.4. That really is very low. From what I understand the Koreans are at least aware of the problem and trying to address it, so I guess we'll see what happens.

Anon1.5: I think there probably was a shock in the early 90's, but I don't the same is true now, unless the economic crisis will do it. Remember that the ATFR shown on the map is calculated for 2003-05 which had pretty steady growth. As for the Czech data, I'm not sure what you're referring to?

At first sight, I was surprised that France 'scored' high here, as Norway and Ireland did. After all, the French population started to decline earlier than in other Western European countries. So I sense a - well, let's say - problematic issue here, that the somewhat higher fertility in France is due to immigrant population having more babies. It's likely not the Fenchmen per se that are having more kids than their neighbours Germans or the Spanish.

Fertility rates have been consistently high and rising across the whole of France, including in regions like Bretagne, Centre, Basse- and Haute-Normandie, and Poitou-Charentes, regions with few of the immigrants we're worried about.

Just to add to what Randy said, it's true that France was the first country to experience the demographic transition, but fertility never fell that low in France. Also, because it was so early it was among the first countries to have an explicitly natalist policy, in part to keep up with Germany. The contribution of immigrants to French fertility is not completely non-existent but it's small enough to be insignificant.

@ Randy: In reply to my previous comment, I'd intended "immigrants we're worried about" sarcastically. Gack.

Maybe France was lucky to have the transition that early, because experience tells us that the later and the faster the demographic transition takes place, the lower the TFR will fall.

And if one is unprejudiced enough, then it is even possible to understand reason of this correlation between the speed of demographic transition and the fertility low thereafter.

By the way: The assumption that every child is planned and that low-fertilty countries would have high fertility rates without contraception and abortion should not be taken for granted. A main problem of demography as a science seems to that it is at a large extent financed by the pharmaceutical industry. Does anybody know a study dealing with fertility of only those not using contraception.

With contraception you mean the pill or everything. Japan for instance uses mostly condoms as birth control. USSR was a heavy user of abortion as contraceptive and wikipedia claims a failure rate of 3% for the basal body temperature methode.

I read stuff like this and wonder if the center of power will return to its 18th Century locus: Paris.

Thanks for this courageous blog.

As a Frenchman, father of four, living inside a big city, may I say that there is indeed a fairly natalistic consensus running here.

No merit here. Possibly for some historical reasons, we are just lucky not to get trapped in religious clichés on the subject.

As a politician or a citizen, you do need need to right-winger to say you care about families as well. Caring about them is just caring about the present time here. Not long term issues.

Coming back from a recent trip to Italy, I could already feel the difference badly enough. Of course, Europe vital strength will strongly recess over the coming twenty-thirty years.