This post is a brief "state of the game" one to accompany our recent material on capacity problems in the Polish labour market. First off, it is interesting to note that there is a debate inside Poland which is begining to wake up to this problem, as the following link from the External service of Polish Radio shows. In fact they make the claim that in 2005 Poland had the lowest fertility in the EU, at 1.24:

The declining birth rate observed for years has prompted the government to come up with a long-term pro-family program, which is expected to encourage women to have more kids. Poland’s fertility rate - that is the number of children per one woman – is the lowest in Europe. In 2005 it was 1.24, whereas the EU average is 1.5, according to a report just published by the statistical office of the European Union – Eurostat.

Actually, it isn't clear that Poland still has the lowest fertility in the EU, since according to the 2006 CIA factbook, by 2006 Polish fertility had sneaked back up to 1.26 Tfr, whilst the Czech Republic was down at the 1.24 level. However - as can be seen from the graph below - whichever way you look at it, Poland has a serious fertility problem, and one which is set to only make those labour shortages currently being experienced worse with time. 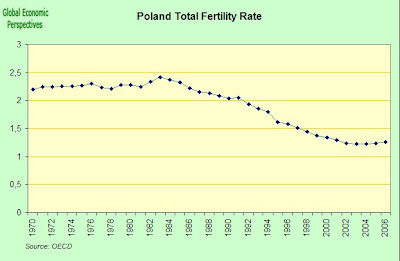 Poland's population has been in natural decline since the early years of this century: 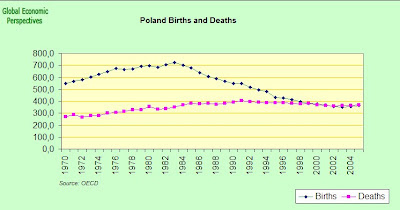 “Since 1984 the number of children born in Poland has been decreasing. In 1999, for the first time, the number of deaths exceeded the number of births. We have a truly difficult demographic situation”. A number of factors are at play causing women to postpone childbirth and to have less children. Aneta Seibert from the Gender Equality Coalition explains.

As suggested in the article, one for the reasons for the strength of the decline in Poland has been - as elsewhere - birth postponement: 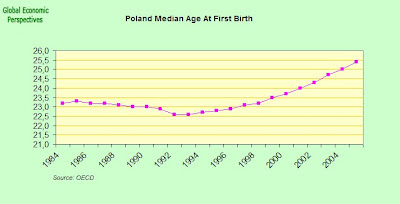 Since the median age at first birth of Polish women is still in the mid twenties, and thus some way below the current Western European norm of 29-30, it would appear that this postponement process still has some way to run.

But in addition to the general postponement process, there are number of other factors at work, which stem from the traditional nature of Polish society:

“One is very evident discrimination of women on the labor market associated with the fact that that they are mothers or that they may become mothers. There is a very wrong assumption among Polish employers that once you become a mother somehow your qualifications disappear along with your commitment to work.”

Another important factor is lack of institutionalized good quality and affordable child care, especially for children under 3. “In Poland only 2 percent of children under 3 attend organized child care while in other countries it’s over 50 percent, similarly with kindergartens.”

Now the response to all of this has been an attempt by the Polish government to give more support to would be parents, the problem is that this costs money, and money is what the Polish government is not exactly flush with given the need to control the deficit and reduce the tax wedge (as mentioned in the last post). So there seems to be a kind of self-reinforcing double-bind at work here.

The government is preparing a comprehensive program of support for the family. Some 5.9 billion US dollars may be spent until 2014 on pro-family measures such as extended maternity benefits, tax breaks for families with several children.

As some of the skeptics claim, all of this may be far short of what is needed, but the question still remains, where is the money going to come from?

The BBC also had an article on the new initiative as well as this more general article on the decline of childbirth in Poland. Essentially the BBC also highlight the missmatch between a rapidly evolving society - and in particular a changing labour market - and the presence of traditional values:

If you asked many people which countries are the most Catholic and traditional in Europe, they would probably answer either Ireland or Poland. And in many respects they would be right. Anna Jurczak, who has six-month-old twin boys. Women's expectations of men are changing, says Anna Jurczak According to surveys, around two-thirds of Poles go to church every Sunday and 70% say that family and children are the most important things in their lives....

So why are family-oriented Poles having fewer babies? It is partly because there is a difference between what people say and what they do. And it is also because Polish society has been undergoing profound changes in recent decades.

"Women are becoming more and more demanding. They want to get a job and career first so they're not dependent on their husband later," says 34-year-old Anna Jurczak, who has six-month-old twin boys. "Twenty years ago you had to get married young but in our generation, my friends and I, first of all we want to find a good job and then we can find someone we can love." And women are getting more choosy when it comes to picking a suitable husband, she says.

Another dramatic change came with the transition from communism to a market-based economy. Under communism unemployment officially didn't exist. Now, at 18%, it's the highest in the European Union.

As well as concerns about job security, there is a chronic housing shortage and many young people live with their parents because they cannot afford a flat. The cost of raising a family is also increasing.Another reason why women are reluctant to break their career to start a family is because they fear they won't be able to get their jobs back after taking maternity leave.

Finally, I think one think needs to be borne clearly in mind here. Any success in nudging fertility back up again using the kinds of measures which are presently discussed will only have any kind of impact on the labour market in over 20 years time, and in the meantime the brunt of the labour shortages problem I spoke about in the last post is really going to lock in between now and 2020.

Which isn't to say that you don't need to address the low-fertility issue, but simply that this alone isn't going to be enough.
Posted by Edward Hugh at 6:22 PM