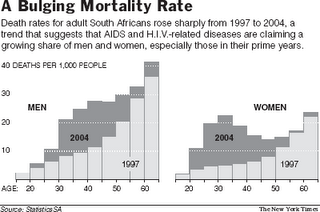 
The New York Times had an article last week about the alarming way mortality rates in South Africa have been rising in recent years. As can be seen from the graphic death rates for adults of virtually all ages and both sexes rose sharply from 1997 to 2004, among some groups by a factor of four or more.

Now as the NYT point out AIDS is not reported as a cause of death in South Africa. But the age patterns of the increased deaths and their reported causes — in many cases parasitic infections, immune disorders and maternal conditions — make it likely that AIDS and ailments related to H.I.V. were behind much of the trend. The report from the SA statistical office on which this information is based seems to leave little doubt that South Africa, with the largest number of H.I.V.-positive citizens of any nation, faces an AIDS problem on a huge scale. Among other significant details which have become apparent the death rate among women in the 30-34 age range was 4.6 times higher in 2004 than in it was 1997 (leaping in the process) to nearly 23 per 1,000, while the death rate among men in the 40-44 age group more than doubled, to nearly 28 per 1,000.

At the same time, according to the latest data set from the Population Reference Bureau, fertility in South Africa is around 2.8 TFR and falling steadily (the CIA give a 2.2TFR figure) and will soon be below replacement level, while total population is already falling at 0.4% per year.

The expession "growing old before growing rich" has been used extensively of late, but it may be that South Africa will never grow either old or rich, at least following the current path it won't, and that's for sure.

So following Claus's recent point about what is happening in Russia, we seem to be able to identify two groups of countries, one in Eastern Europe, and the other in Africa, who have become detached from the 'pack' in a very meaningful sense. What we urgently need is a theoretical framework in both economic and social theory which enables us to better understand the processes at work here.
Posted by Admin at 7:01 AM

Were similar trends/patterns observed in Portugal esp in 1950s and 1960s, when emigration (of working age population) was high and mortality rates were higher (relative to rest of Europe) ??

"Were similar trends/patterns observed in Portugal esp in 1950s and 1960s, when emigration (of working age population) was high and mortality rates were higher (relative to rest of Europe) ?"

No. What is happening in Southern Africa and the ex USSR is unique and preoccupying. Spain, Portugal, Greece etc had fairly high fertility rates 3-4 TFR, and then dropped rapidlly as the economies took off. This has nothing to do with the rising mortality we are talking about here.

It is important to realise that there are both centrifugal and centripetal processes at work in globalisation, and that these forces are at the present time stonger than ever before. What this means is that some people can 'couple' very rapidly indeed, while others can be thrown out just as rapidly in the cockpit ejector seat.

If we look at economic development in what used to be the third world we can now see that a large part of this is 'coupling' very rapidly, in a way which wasn't foreseeable in the 1990s. One symptom of this is the fact that the debate about reforming the IMF is really a non-debate, since no-one is really that interested any more. This is a huge change from the days when the IMF was really seen as the 'bad guy', and the IMF itself hasn't really changed that much in the meantime.

OTOH the UN has actually singled out 18 countries who are going backwards while all this is happening. These countries are either in Southern Africa (where AIDS is a big part of the picture) or, as I said, in some parts of the old USSR.

For some more general background read the recent post on Moroccan fertility and comments which may make some things clearer.

To complicate things further, South Africa has been the destination for massive waves of emigration from elsewhere in southern Africa. HIV is still an issue for these immigrants--for instance, for the ~3M Zimbabweans--but the sheer scale of the migration suggests that South Africa will have to deal with population growth for some time yet.

Yes , indeed Portugal was saved by the High Fertility rates , (influenced by Roman Catholic faith ???) and that helped them to see a rebound in population growth in 1970s.

Surely such a thing is impossible in Ex USSR /South Africa - thanks to things like low male life expectancy (in former) or AIDS (in latter).

Which also brings another interesting coincidence- both Ex USSR and South Africa are extremely resource rich nations, with fairly decent physical infrastructure (though not the best). They only way i see for their economies to grow (in this demographic situation) is to institute some guest worker scheme and get more of cheap labor from outside to exploit their riches. Perhaps that is already happening...

The kicker is, of course, that Zimbabwe has a higher HIV infection rate than South Africa --though it's a bit lower than Botswana's almost unbelievable 40%+ (!) And given the famine and collapse of public services there, it's probably getting worse, fast.

Zimbabwe's population is essentially static as far as the birth/mortality ratio is concerned and the only reason it hasn't started declining (yet) is that the TFR is still higher than SA's or Botswana's -- 3-ish.

Swaziland, one should note, has similar fertility but _is_ declining, because the HIV epidemic is a bit further along.

And of course migrant workers are in the prime agegroup for HIV infection and the very process of immigration makes HIV infection more likely.

In other words, to be very blunt the Zimbabweans coming to SA or Botswana are going to work for a few years and then, in virtually all cases, die.

Note that SA's TFR is just above replacement level -- 2.12

This is a very sharp drop from the levels of only 20 years ago, and there's no sign that it'll stop falling anytime soon. Both the ordinary modernization-induced fall which you'd expect in a semi-modernized country and the depressive effects of HIV on fertility are at work.

With the current HIV infection rates, if the TFR falls to, say, 1.8 or 1.5, then population decline will hit historically unprecedented levels -- well over 1% annually, possibly as high as 2%.

Even on projections which assume no further decrease in fertility population will fall substantially over the next 25-50 years. If you assume -- realistically, I would argue -- that fertility will continue to fall, then we're looking at catastrophic depopulation.

Also, of course, HIV infection is not uniform across the SA population. It's regionally and ethnically very uneven.

"They only way i see for their economies to grow (in this demographic situation) is to institute some guest worker scheme and get more of cheap labor from outside to exploit their riches. Perhaps that is already happening..."

"According to the Factbook, SA's population is now dropping at about .4% annually."

True, but Statistics South Africa estimates that the country's population is three million larger than given in the Factbook.

"[G]iven the famine and collapse of public services there, [Zimbabwe's HIV problem is] probably getting worse, fast."

"In other words, to be very blunt the Zimbabweans coming to SA or Botswana are going to work for a few years and then, in virtually all cases, die."

Perhaps not. One-fifth of the general Zimbabwean population--no idea how this maps onto the profile of migrants--suffers from HIV infection, while other migrants are likely to contract HIV in South Africa on arrival. "Virtually all cases," though?

According to the CIA World Factbook's estimates, which differ substantially from those provided by the South African government.

"Even on projections which assume no further decrease in fertility population will fall substantially over the next 25-50 years. If you assume -- realistically, I would argue -- that fertility will continue to fall, then we're looking at catastrophic depopulation."

This is a possible worst-case scenario. There are good reasons to suspect that HIV infection rates in South Africa have been inflated, not least because of the upwards bias connected to surveys at antenatal clinics.

"Also, of course, HIV infection is not uniform across the SA population. It's regionally and ethnically very uneven."

Van Aardt's analysis showed "a complex combination of HIV and Aids and population ageing" will influence deaths in the white population.

This, "together with economic factors such as higher levels of unemployment, a greater per capita incidence of poverty and a lower level of access to private health care facilities for whites will jointly give rise to a nearly 50 percent increase in the annual number of deaths during the period 2001 to 2009."

The Asian/Indian population would not be significantly affected by HIV and Aids. Instead an ageing population would lead to an annual increase in deaths from less than 9000 in 2001 to slightly more than 12 700 by 2021.

Whites will decrease from 11,5 percent to 9,4 percent over the same period, while Asians/Indians at 2,4 percent and coloureds at 8,4 percent remain fairly constant.

All four population groups are expected to show high levels of ageing.

The growth rate of the black population would decline to about 0,42 percent by 2009.

"Thereafter it is expected to increase again as the number of HIV and Aids-related deaths among members of this population group tapers and declines."

The black, Asian and coloured populations were expected to grow, while the white population would shrink with a negative population growth of about 0,41 percent a year.

This survey certainly suggests so, with higher rates of HIV seroprevalence in the east than in the west.

To be blunt, the SA government's statistics are questionable, particularly in the demographic field, and most especially in anything to do with HIV.

South Africa's figures may well be inaccurate. Could you provide some illustrative cites? I'd be quite curious to see the degree to which the figures may, or may not be, off.

I do feel confident in saying that statistics for HIV seroprevalence based on results in antenatal clinics are likely to be overestimates--this is also the case in West Africa. Women who present themselves at these clinics are rather more likely to be at risk of contracting HIV than women who don't, for obvious reasons. There are further good reasons, as I've said above, to suspect that HIV seroprevalence is falling in Zimbabwe because of the mass deaths of the infected. Is this factor operating in South Africa? I wouldn't be surprised, but lack of surprise is quite different from actual data.