For a change I can offer some news from home. After a massive influx of immigrants during the 90´s the Netherlands finds out it has become an emigrant country. In first place to be exact. In front of some regular countries we associate with migration like Poland.
The net migration graph for 2005 shows some interesting developments. Although you need to correct these numbers for population (e.a Lithania still comes first if we were to look at the number of net migrants per 1000 inhabitants, Austria is also an interesting case on the other side of the spectrum). 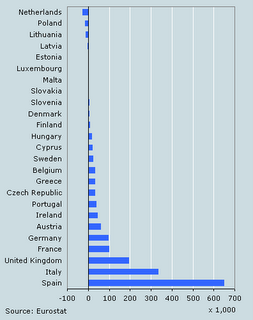 The Netherlands is the only country in Western Europe where emigrants outnumber immigrants. In 2005, an unprecedented 121 thousand persons left the country. Immigration totalled 92 thousand persons. Such a large negative netmigration is found nowhere else in Europe.

Emigrants outnumber immigrants since 2003
For decades, the number of people who came to settle in the Netherlands outnumbered those who were leaving the country permanently. This situation changed in 2003, when emigrants outnumbered immigrants for the first time. There seems to be no end to the emigration increase in the foreseeable future. In the first quarter of 2006 29 thousand persons left the Netherlands, 5 thousand more than in the same period one year previously and the negative net migration trend appears to continue and grow.

Of course details matter, while most people migrating fall in the 20-30 category there are some other trends. Some emigrants are getting older. This trend started in the 90´s as well.

In 2005, one quarter of emigrants whose country of destination was known, settled in Belgium or Germany. Lower house prices in the neighbouring countries probably played an important part in the decision to leave the Netherlands. Other popular destinations are the United Kingdom and the Netherlands Antilles and Aruba.

Is there significant Dutch emigration to Australia or New Zealand? Presumably this is more of an option for younger Dutch people, rather than retirees.

The economic effect would presumably be worst if it is talented younger people of working/taxpaying age who are leaving.

It is the higher educated population on the whole, but the ones that move to germany and belgium usually still work in the Netherlands. There is a hugh difference in houseprices between the countries.

Australia en New Zealand are popular destinations when people consider emigration, but in practise less people go there - probabely due to restrictions on the targetted countries. The piece I linked to has a graph at the end.

Thanks for that. It's much clearer!

I can imagine a retiree selling his/her house in the Netherlands, moving to a neighbouring country and using the profit as a pension bonus. But apart from that, I wouldn't expect rising house prices to be the major push factor out of the Netherlands. After all, the market you're buying in is also the market you're selling in. Ireland used to be a country of cheap property and high emigration. Now it's got expensive property and historically high immigration. In general terms, I'd expect places where lots of people want to live to have rising house prices, and places where lots of people want to leave to have falling prices. Wouldn't you?

For the same mortage costs I now have for a simple family house with a tiny garden, 5 bedrooms and neighbours on both sides, I could have a freestanding bigger house over the border.

Plenty of people move 50 km or so and have (for the same monthly costs) much more house/space/room for their money. In Belgium your kids can go to school 1.5 years earlier than in the Netherlands, childcare is much cheaper and childrens benefits are much higher (I don't know about Germany).

Most of the emigrants actually still work in the Netherlands, but choose to travel slightly longer.

I see. Yes, that seems right. The Netherlands is a sufficiently small country that virtually all of it is "near the border" of some other country.

There are some borderagreements with both countries about pensionrights, taxes, etc.

But voting is nationality dependent in the Netherlands. My British husband has lived here for 11 years, has three sons, a wife, a house and a well-paid job but can only vote in the BRITISH national elections. My cousin in Australia, who has been to the Netherlands only once in his life and speaks about 10 words of Dutch CAN vote in our elections if he'd want too.

The way I describe the current situation probabely allready indicates that I don't really agree with how it works :)

The Socialists have a great policy. Let shit uneducated goat herders from Morocco in and let them go back and marry a new arranged bride every few years and live on welfare. Meanwhile, educated professionals leave for lower taxes and better opportunities elsewhere. Needless to say, the Moroccans know who to thank and vote for all the leftie parties in big numbers.

Well obviously you won't be having the pleasure of enjoying the advantages of visiting that lovely country anytime soon.

On Morroco, if experience here in Spain is anything to go by, there are few Morrocan migrants now heading for France. Here is Spain there is massive inward migration, but in the last few years the number of Morrocans coming has really reduced to a trickle.

The reason isn't hard to understand, since Morroco itself now has near replacement fertility, and is starting it's own economic development process. There is a lot of investment now going from Spain to Morroco (probably from France too, although I don't *know* this, it's a guess), and the employment is starting to be created there.

My guess is also that, as in the Spanish case, many of the new 'irregular' migrants arriving in France come from Sub-Saharan Africa.