Well, maybe this is just one way of saying that Claus is doing some guest posting over at A Fistful of Euros. The principal theme of Claus's firt post is flexicurity and the Danish labour market model, but the issue of migration in and out of Denmark has rapidly emerged in the comments. This, of course, got me digging around.

Now for all the proclaimed openness, I have to say that I didn't find the Danish statistics office site among the most user friendly I have come across of late. Nonetheless there is a micro-database, and if you ask the right questions you can get the answers you are looking for. Like migration for q4 2005: immigrants 9,869, emmigrants 10,076, net-migration thus was a negative outflow of 207 people. This needs to be put in the context of a population which now has very slow natural growth (1,637 in q4 2005). Now these numbers may seem comparatively small, but they need to be contextualised by the fact that Denmark is a comparatively small country (total popn q4 2005 5,425,420).

And it should be remembered that Demarks population continues to age. Here's the age pyramid for 2000. 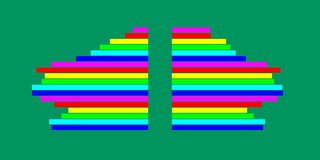 One way of reading this pyramid is that Denmark seems to have begun birth postponement about thirty five years ago (around 1970, the first purple line). This continued steadily till about 15 years ago (the yellow, minimum recent generation, line). Then two things happen, displacement continues, but those who have been postponing start having the delayed babies, hence there is a small rebound, before the generational reduction set in again.

Now, looking at all this in the longer term, according to the latest version of the CIA factbook Denmark has a median age of 39.47 and a fertility rate of 1.74 (TFR), which means that if the migration flow doesn't start to invert, and to a significant extent, Denmark's population will soon start to decline.

All of this raises the same issue that Thomas was discussing in this post, about the growing phenomenon of emmigration from Germany: will there be winners and losers in the immigration game. Will some countries be net winners, and others net losers? And without wishing to politicise this post especially, don't those countries which are failing to attract significant inward migration need to ask themselves what it is which makes them unattractive as an end destination?
Posted by Admin at 2:02 PM

So Denmark has become an emigrant country too, wasn´t aware of that. It´s interesting to see that a lot of original estimates made about immigration in the 90´s are now way off the mark. It´s more like a night out at the casino, some win big, most go home with a small loss*. Many countries are barely net or have even become emigrant countries.

And to add a note of caution on a future ´recovery´ in immigration, a lot (the majority) of immigrants coming to Western Europe are from Easteuropean origin. That stream is going to dry up in the next decade or so.


*Although I´m thinking some countries might enter a negative cycle where strong emigration might become selfreinforcing due to poorer economic prospects because of ageing AND emigration. To stay within the casino analogy..."and some may end up losing their skirts"