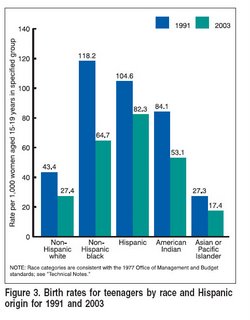 
According to the CDC report:

Declines in rates have been especially striking for black teenagers: their overall rate dropped 45 percent since 1991, whereas the rate for young black females 15–17 years has plunged more than half. Rate declines for all teenagers were substantial enough to more than compensate for the increased number of female teenagers, so that the number of births to women under 20 years dropped to the fewest since 1946, the first year of the baby boom.