China's Looming Demographic Problem Moves Steadily Up Over The Radar

As Israeli blogger "Nobody" points out for us,the Economist has been giving increasing coverage to global demographic issues of late, and this week it is China's problem that has caught their eye. 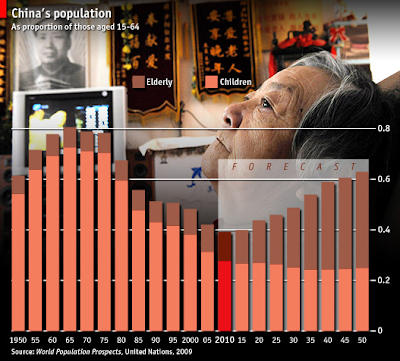 As the Economist point out, the impact of so many years of one child per family policy is going to be significant, and while changing it now will be too late to avoid short term damage, in the longer term such a change is essential, if the country ever wants to return to some kind of structural stability.

SINCE the 1970s China’s birth rate has plummeted while the number of elderly people has risen only gradually. As a result its “dependency ratio”—the proportion of dependents to people at work—is low. This has helped to fuel China’s prodigious growth. But this “demographic dividend” will peak in 2010. China’s one-child policy will keep birth rates low, but as life expectancy continues to increase, so will the dependency ratio, reducing the country’s potential for growth. The government could yet salvage the situation by loosening its one-child policy. More children would increase the dependency ratio until they were old enough to join the workforce, but reduce labour shortages in the long term.

Again, no one really knows what the present Chinese TFR actually is. The US census bureau have just revised down their estimate to 1.5 from 1.8, but many internal studies put it at nearer 1.3, which, if accurate, is bound to produce a major structural distortion in the population pyramid. The economic consequences - for the whole planet - are also bound to be significant, as "Nobody" points out:

Meanwhile, given the general propensity of China to rapid economic growth and no less dramatic deceleration of its population growth (the workforce will stop growing pretty soon actually), the next superpower is about to transform itself into a huge vacuum machine sucking off labor surpluses from around the globe. Inside China labor shortages will develop and wages shoot up pushing labor intensive industries out of China and generating demand for these products from outside China. In short, after a decade or something, the global economy, and even more so the economies of the third world, may get a friendly push forward from the world's next superpower, and a very massive one on that occasion.

What China's demographic deficit has in store for all of us a decade or so from now is actually far from clear, but one thing is certain, it will be a roller coaster ride. Get ready to fasten your seatbelts.

Quite coincidentally, a new blog was born yesterday - the anarchist banker - written by a young Portuguese economist who is a unabashed fan of Fernando Pessoa. His first post reviews a paper - The End of Chimerica - written by Niall Ferguson and Moritz Schularick.

For the better part of the past decade, the world economy has been dominated by a world economic order that combined Chinese export-led development with US overconsumption. The financial crisis of 2007-2009 likely marks the beginning of the end of the Chimerican relationship. In this paper we look at this era as economic historians, trying to set events in a longer-term perspective. In some ways China's economic model in the decade 1998-2007 was similar to the one adopted by West Germany and Japan after World War II. Trade surpluses with the U.S. played a major role in propelling growth. But there were two key differences. First, the scale of Chinese currency intervention was without precedent, as were the resulting distortions of the world economy. Second, the Chinese have so far resisted the kind of currency appreciation to which West Germany and Japan consented. We conclude that Chimerica cannot persist for much longer in its present form. As in the 1970s, sizeable changes in exchange rates are needed to rebalance the world economy. A continuation of Chimerica at a time of dollar devaluation would give rise to new and dangerous distortions in the global economy.

I would just note in passing that the China-United States nexus was not the only export-lead/excess consumption duet we just left behind, there was the Sweden-Baltics/Ukraine one, the Germany-Southern Europe one, and the Japan-RoW one (rest of the world). As we wave bye-bye to one era, it is just worth noting than we don't seem to have a very clear idea of what the one which lies ahead may look like.

Anyway, thanks to the anarchist banker blogger for drawing this all to our attention. As the author himself admits, posting may be infrequent (anarchic?), but they should always be worth the read.
Posted by Edward Hugh at 10:16 PM

This sounds like great news, both for China and for the rest of the world. China and the world would be better off with a lower population and having a prosperous, but aging China would give a massive boost to development in other, younger and less developed economies.

One child one family is easily the most ignored solution to saving the planet. You guys should be championing it. It's pure demography.

First of all we are not saving any planet, we are only saving ourselves. If you feel like confused about this point, I would recommend the following video, it will clear these matters for you once and for all.

Second, there is a problem with the one child policy. If you would suggest shooting out every fourth person in every age group over the course of the next 20 years, I would consider this a very pragmatic and reasonable solution for shrinking population.

However, what we are dealing with here means shrinking population by means of one process only: uninterrupted aging. There is a problem with championing this long ignored solution since some people doubt that human society can be put through this without collapsing in the process.

Hugh, could you provide any references or links to those "many internal studies" that claim that China's TFR has already fallen to 1,3? I would be interested to see them.

"Could you provide any references or links to those many internal studies that claim that China's TFR has already fallen to 1,3?"

Yeah, sure. The best summary I have seen of the level of uncertainty surrounding Chinese fertility is this paper by Lutz et al:

Claus also had a couple of links that might interest you if you are following the topic:

Basically my impression is that the situation is even more chaotic than with the economic data, and no one really knows. On the other hand, if you simply look at the size of the entry cohort into the workforce, and how this is falling, then that can give some measure of the scale of the problem they now face.

Negative on the two 'ifs' you assert as conditionals.

Additionally, the confusion you conclude is ironic as it's an oxymoron when you assert I'm both saving myself and championing the collapse of society.

You can have one, but not both.

You too can have only one of them and this is what I am telling you: I may not get the first one.

This is only good news in human development terms if ALL of the following accompany this demographic forecast:

- Chinese political liberties ease so that it becomes as attractive as other aging, labor-poor polities