Just a fairly brief post to sign-in again after what has been a rather long summer break. Claus and Randy have both put up recent posts which highlight the problem of demographic imbalances, and in particular gender related ones.

Randy points out that the long standing issue of 'excess' male births in the third world is likely to present a serious problem in the not too distant future with a lack of available marriage partners in large countries like India and China, a problem which will only serve to compound the pyramid structural issues associated with the arrival of below replacement fertility. Claus, on the other hand, directs our attention to the issues which arise in the context of a developed and rapidly ageing society like Germany, where it seems lack of economic growth is leading a growing number of young and qualified Germans to 'throw the towel in', and seek a seemingly brighter future elsewhere.

One thread which ties the two issues together is the question of gender imbalances. Conveniently Geohive has a table which classifies population by gender ratio. What can be seen at a glance (by skimming down the right hand column) is that there are two poles. At one extreme we have countries like Lithuania (where the ration of women to men is 100:87), or Ukraine (100:85). At the other are countries like Afghanistan (100:107) or Bahrain (100:132) or Saudi Arabia (100:117) or China (100:106) or India (100:105).

Clearly there are two things going on here. In underdeveloped countries abortions are being extensively used for gender selection purposes, and in the long run the fertility decline will be even greater than that reflected in the Total Fertility Rates (since this measures children per female of child bearing age, and what we are likely to see is a large rise in childless males, which will impact the population pyramid even more than will be reflected in the TFR).

On the other hand in ageing developed societies there is a gender imbalance which is created by the fact that women live longer than men, and this issue is only added to by the fact that in some of those societies with the worst imbalances (some East European states) life expectancy is either stagnating or even reducing in the male population. The economic stagnation which is associated with this evolution is producing a situation where many young males are leaving (Lithuania, the former East Germany) and this then only adds to the extent of the fertility decline as an increasing number of younger women remain single and childless. 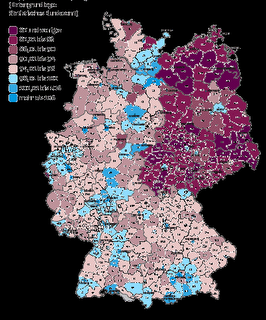 An illustration of this process at work can be found in the gender chart for Germany. All those regions in deep purple to the top right are the Lande of the old DDR, and almost all of them have ratios of less than 85 males per female (if you click on the graphic you should be able to see a more or less readable interpretation of the colour coding). Clearly none of this is very sustainable, but exactly how it will all unwind is, at this point in time, far from clear.
Posted by Admin at 11:57 AM